Welcome to the home of Redemption®

Released in 1996 the Player's Guide was an expanded rulebook giving insights into rulings and card play. The player's guide was retired when the decision was made to add a larger, more extensive rulebook to the starter decks.

A & B STARTER DECKS 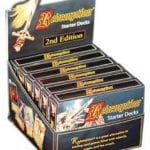 The Warriors booster packs released in 1999. To say that the Warriors saved Redemption® would be a serious understatement. With the addition of the silver brigade characters like Michael and Gabriel and other powerful warriors found in the Bible, the Warriors set quickly sold out in 2003. The decision was made to retire the set and then reprint the cards in later sets. Some of the Warrior cards are now found in the Kings Expansion set and G & H Starters.