Welcome to the home of Redemption®

THE HISTORY BEHIND REDEMPTION AND CACTUS GAME DESIGN, INC.

Cactus Game Design began with the Redemption trading card game. To understand why I created Redemption, you need to know a little bit about me.

I love to play games. I grew up in a home where my parents taught me a fond appreciation for games. I am pleased to say that we spent more time around our kitchen table playing games than we did in front of our television (and I think I'm a better person for it). I have been extremely blessed in that I have been able to earn a living designing and marketing games. I now have my own family with a loving wife, three wonderful sons, and three lovely daughters.

In 1989 I went to work for Cactus Services, Inc. Cactus had just begun to develop a new division (Cactus Marketing Services) to help inventors get their new products to market. With my involvement, we put more and more focus on new toys and games. The first game we licensed was Scattergories to Milton Bradley. We then licensed toys and games to other companies. Some we created in house; others came to us from outside inventors.

We have licensed games to Hasbro, Parker Brothers, Pressman Toys, Ravensburger, Mayfair Games, and others.

a Game of Faith

When collectible trading card games first came on the market, I found many aspects of the game idiom intriguing. To me, being able to create my own deck and play it against an opponent's deck was a wonderful aspect of the game. In fact, I personally found the strategy of deck formation almost as much fun as playing the game.

Yet, many of the games available had dark and horrific themes. The question in my mind at the time (July of 94) was whether or not I would be comfortable with my children playing a game with such artwork and themes. My answer was no. You see, my wife and I both have made a commitment to raise our children in the love and admonition of the Lord. Much of what is offered in the collectible trading card game market is difficult to reconcile with the Christian faith.

I suspected that I was not the only parent who would have concerns about some of these games. Recent events have confirmed this suspicion. The question then came to mind: "To what topic would I not object and even encourage my children to play?" The answer immediately came: "Design a collectible trading card game based on the Bible."

The Bible is a wonderful source for this kind of game. It contains both very good people and very evil people. It has a wide variety of concepts, tools and artifacts that can be used as enhancement cards. It also contains a wealth of spiritual information from which all can benefit.

Between July and November of 1994, I worked on the game design and play-tested it. The game went through many variations before I finally settled on a design. One of the early versions of the game used dice to determine battle outcomes. I liked the element of luck the dice added but eventually decided it was better to rely on card modifiers rather than the dice.

During this same time I approached two different game companies about licensing the game rights to them. At first I considered the game primarily as a game for the Christian bookstores. As more of my friends in the industry found out about the game, they encouraged me to sell it into the Adventure Game market as well.

By December, one game company had declined saying they were already too busy with other card games. A second company placed an offer on the table. At the same time, my associates and I started examining the possibility of publishing the game ourselves. We had always licensed games to existing publishers. Publishing the game ourselves would require much more work and money on our part. But I did some research and wrote a business plan to see if we could effectively bring the game to market ourselves.

Our conclusion was that we could, so we declined the offer from the other game company and began moving forward. 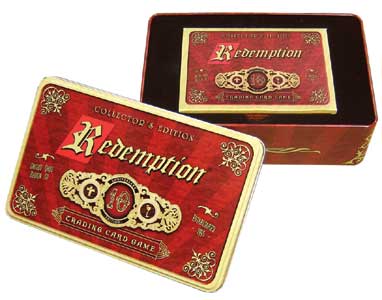 "Fortunately, by the end of the month we had funded the project and were turning away investors." 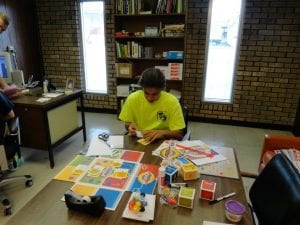 Then came raising capital, hiring an art director, subcontracting out the illustrations, hiring a printer, assigning all of the in-house tasks, and simply doing the work. January was spent raising capital for the $600,000 dollar project. Fortunately, by the end of the month we had funded the project and were turning away investors. February and March were consumed by playtests, design revision, and riding hard on the freelance illustrators. April brought more of the same, plus we started our advertising and public relations campaign. In addition to all this, there were the complicated legalities necessary to protect all of our trademarks and copyrights on the game.

Along the way, we continued to get encouraging responses from both the Christian market and the Adventure Game market. We previewed the game at the Christian Book Publishers Convention in Nashville in January of 1995 and received a strong response. All of the major Christian distributors signed up following the show. The GAMA Convention in New Orleans in March of 1995 also went great.

We began shipping the game in July of 1995. Since then we have released numerous expansion sets, the latest being Cloud of Witnesses. Redemption has been endorsed by Focus on the Family, The 700 Club, the Baptist Sunday School Board, Campus Crusade for Christ, and the Salvation Army.

We look forward to the up coming conventions and tournaments with great anticipation. But most of all we look forward to game players enjoying our games. More than anything else I believe a game should be fun. If I can sum up our mission statement in one sentence it is "to produce fun games with Christian content."

How Cactus Got Its Name

My co-partner in founding Cactus Game Design in 1995 was Pete Carr.Pete founded Cactus Services, Inc. in 1984 and hired me in 1989. Pete is a retired Navy captain. He was also a Navy pilot for many years and then the captain of several ships. One of his commands was an amphibious assault ship named the Guadal Canal. During World War II the Americans retook the Guadal Canal Islands from the Japanese in "Operation Cactus." Moreover, one of the Navy squadrons that flew in that invasion was the "Cactus Squadron." The inspiration for the name "Cactus" comes from that World War II battle.